Pacific Islands becoming the fattest place in the world?

A recent scientific study has shown that the people within the Pacific region are amoung the most obese in the world.

This has been linked to a life based on mostly imported food, little exercise and remote access to healthcare.

Of the top 10 most obese countries or territories in the globe, nine of them are from the Pacific region - according to the World Health Organisation; thus making it the fattest region in the world. 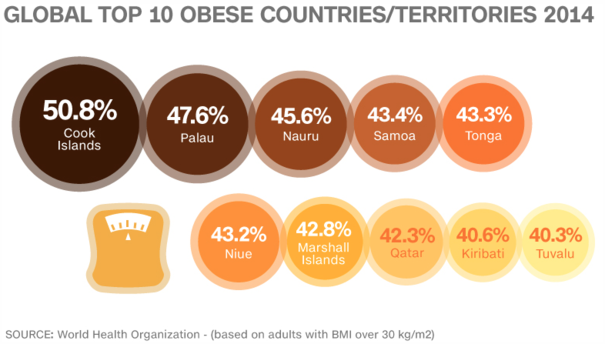 "Up to 95% of the adult population are overweight or obese in some countries," says Temo Waqanivalu, program officer with the WHO's Prevention of Non-communicable Diseases department.

As a Fijian, Waqanivalu has seen this epidemic continually grow for over a decade, and hasn't been helped by the culutral acceptance of bigger bodies is beautiful.

What do you think? Is it a cultural thing to accept that we are 'bigger' as a people - or are these findings a bigger need for concern?

Read up more on the story here!