How Can Tiny Samoa Dominate The NFL?

When University of Washington Defensive Tackle Danny Shelton arrived for the NFL Draft in Chicago wearing traditional Samoan dress and almost choked the life out of Commissioner Goodell in an on-stage hug, it symbolized the amazing dominance that one tiny island and its’ Polynesian neighbors have in NFL football. Five Polynesian players were selected in the first 66 picks of the 2015 NFL Draft, the most ever for the first three rounds. Over 70 players in the NFL are of Polynesian descent. There are 30 players from American Samoa in the NFL and more than 200 play Division I NCAA Football. A Samoan male is 56 times more likely to play in the NFL than an American non-Samoan.

Super Bowl Champions Jesse Sapolu and Ma’a Tanuvassa along with Kevin Kaplan and his company Coaching Charities decided to pay recognition to the contributions by establishing a Polynesian Football Hall of Fame in 2013. It had its’ first group of inductees the next year including players like Junior Seau, Kevin Mawae and Jack Thompson (“The Throwing Samoan”). Earlier this year it inducted players like Jesse Sapolu and Mark Tuinei. University of Oregon QB Marcus Mariota, selected 2nd in this year’s draft was honored as the 2014 College Player of the Year. The Hall is located in the Polynesian Cultural Center on Oahu in Hawaii.

A pioneering group of college coaches recognized the uniqueness of Polynesia (Hawaii, Samoa,Tonga, Easter Island, and New Zealand) in the quality of football athletes it produces. Dick Vermeil, Dick Tomey, and LaVell Edwards made early trips. Former Hawaii and SMU Coach June Jones established a special relationship with Samoa and established a foundation there to help with Samoan athletics.”They have a unique culture that venerates family and work ethic” Coach Jones says.”There is an amazing spirit and feeling that one feels interacting with these warm and spiritual people.” 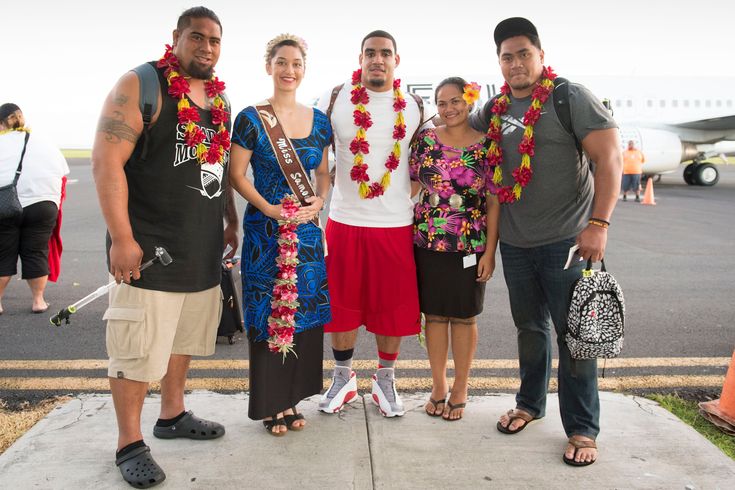 The tiny island of Samoa, often referred to as “Football Island” has a population of 65,000 people. This is smaller than my city of Newport Beach, a very active and athletic area that has only Matt Barkley in the NFL. How is the hyper-productivity of Samoa even possible? It starts with a culture that emphasizes community, self-discipline, respect, and spirituality. Families are close and supportive. The athletes tend to be humble, it may be the last bastion of youth outside the American South that says “Yes, Sir”. There is pride instead of jealousy for the accomplishments of other athletes. Passion for every activity is bred into young Samoans.

Physical anthropology somehow must play into the massive size and strength and speed of most of the athletes. One theory holds that the residents migrated far in the past from much colder climes and needed bodies that could add weight to protect them. Another theory is that there was a history of strife and warfare and a love of contact is part of the culture. There is poverty present in Samoa and other islands which serves as a motivating factor in using sports to advance.

The Polynesian Football Hall of Fame will continue to grow with the rising number of Polynesian players at every level. It celebrates a special culture and tradition. Tiny Samoa is an amazing anomaly in the history of sports.