Humans of the Islands: Genah Fabian

Genahs background:  I was born and raised in West Auckland as a kid and then we moved into central Auckland when I went to High School.  I went to Auckland Girls Grammar - AGGs (laughs) and when I was 19 I moved to Sydney, Australia and was back and forth to NZ - my family are all still here and are based Central so it's handy.

I'm Samoan, Maori, German - my Mums Samoan/German and my Dads Maori.  My Mums family are from the island of Upolu.  My grandmothers from Lufilufi, Lefaga and Saleimoa and my Dads Tainui which is Waikato. 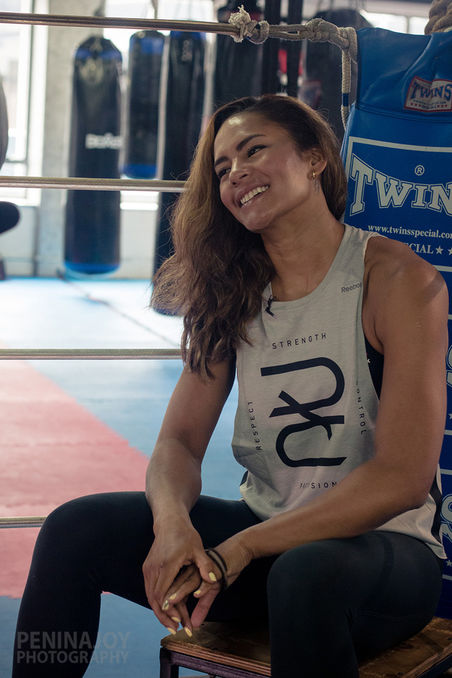 Genahs Athleticism:  As a Junior I competed in Track & Field since I was 6 until about 19 and did really well as a Junior - competed all around the world and New Zealand, the Junior Olympics and yeah, that was my background and my base growing up.  The reason I stopped track was because I tore my hamstring really, really bad and you know I rehab'd and tried to come back the next season but I think mentally if anything, it threw me off.  Being young at the time I didn't quite know how to deal with it I think, that kind of setback and it was my first real injury so yeah, I stopped after a while.

That was a really hard time in my life I remember, because I was like 'What do I do now?'  I've done this my whole life and I've been this high achiever in track and thought I had a future there and then I didn't you know, so I was a bit lost for a few years. 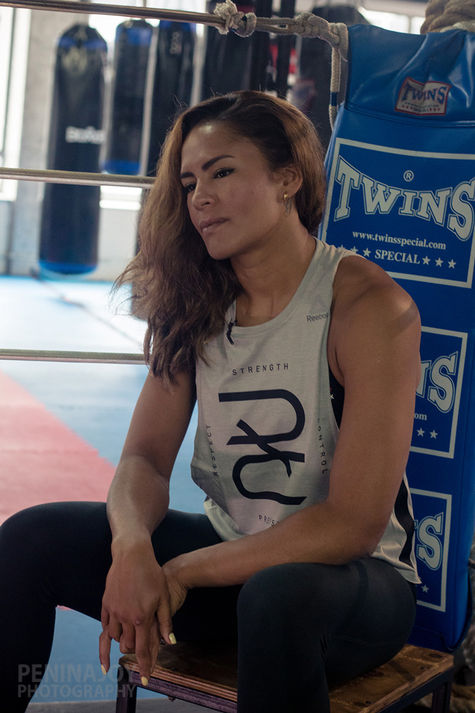 Genahs Fighting:  With the fighting, I had no aspirations to ever be a fighter, I never even thought about it but it was just on a trip to Thailand I tried Muay Thai for the first time just for fun and fitness.  I immersed myself in it and gradually as time went on I fell in love with it and then started to pursue it as a career.  I thought 'Oh you know, I could be really good at this if I work really hard and keep going'.

So I trained Muay Thai for a year straight but quite intensively, like it wasn't here and there - I was training every day again just for fitness and then my trainer at the time asked me on 3 days notice if I wanted to fight.  This was in Thailand so it's full rules - it's elbows, there's no shin guards or headgear or anything like that - so I said "You think I can do it?" and he's like "Yeah, sure why not!" you know the Thais they think everyone can fight (laughs) and I was like "You sure?" and he's like Yeah!  So I was like OK!  and yeah, thats how my first fight went down on 3 days notice! 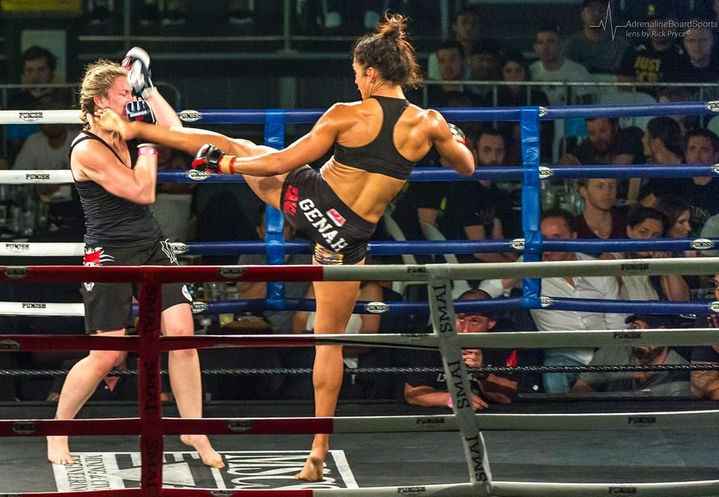 Genahs Fight Life:  My next fight coming up is K1 (Kickboxing) at Bellator in Budapest, Hungary and then my next 3 fights will be MMA.   MMA is a totally different game in comparison to K1 and Muay Thai - they're totally different.  You've got that different element of takedowns and wrestling and then even the striking approach is different with MMA to a stand up Kickboxer - you've got to look for different things so I can't go in there like a Muay Thai fighter to MMA because that could count against me against someone who had stronger wrestling or wants to take you to the ground.

I used to get very worked up and very nervous which is normal as well, any fighter who says they don't get worked up or nervous is lying I think, cos you do no matter who you are.  I'm learning to channel my emotions and my adrenalin and things like that more and more each fight.   You know what?  This is the first time I've been back home for a fight camp and this is the most relaxed and easy I've felt, I'm usually quite stressed - I put a lot of pressure on myself but you know being around my Mum, my sisters and my family, the CKB crew, Euge and all those guys - they're cool!  I live overseas and I forget how chilled out and genuine and just easy going Kiwis are and I miss it.  It's been amazing so far. 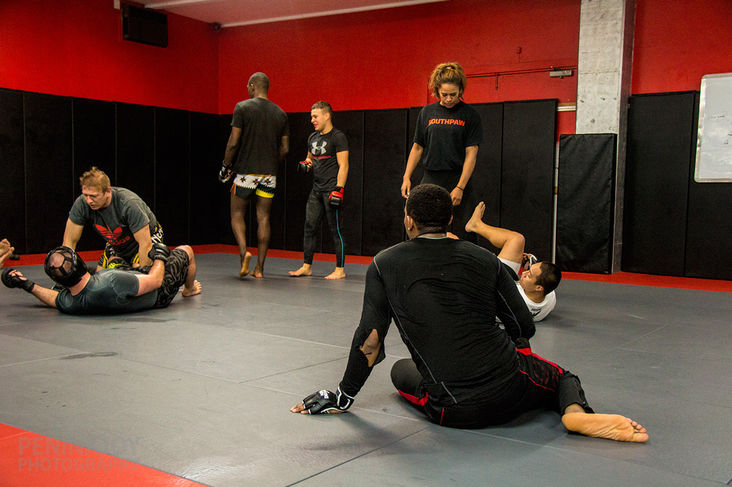 I get more hurt in training honestly than I have in my fights, if I'm gna get banged up or cut up bad then I'll deal with that at the time, hopefully not, but no - my fights are so much easier than the gruelling training that I have to go through day in, day out and yeah, I've gotten more injuries outside the fight.

Over the years I've learned to be a lot tougher and stronger for sure - in the head more so than physically.  I know I'm tough physically you know, I've broken my collar bone, busted my nose, cut eyes and everything like that and fought & trained in Fight Camp with completely broken bits;  but you know thats part of fighting for everyone.  Mentally though, I've had to develop toughness and resilience.

Genahs Training Schedule:  At the moment I'm training 3 times a day, I'm doing my pad work and technical training, I do a bit of grappling as well afterward - it's just so that even though this particular fight is K1, it's to keep it up because my next fights will be MMA so nothing strenuous.  Then I have my Strength and Conditioning work with Coach Sunz in HPU at Les Mills, then it's back to City Kickboxing at night and we'll do more pad work, a lot more drilling, bag work or fight specific conditioning stuff.  So yeah, training 3 times a day. 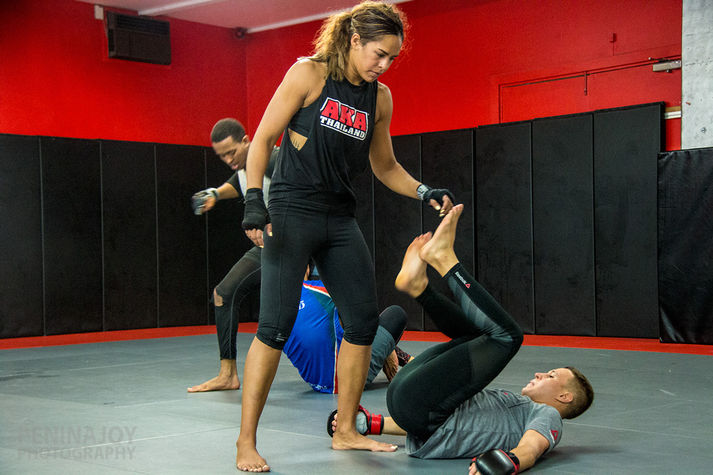 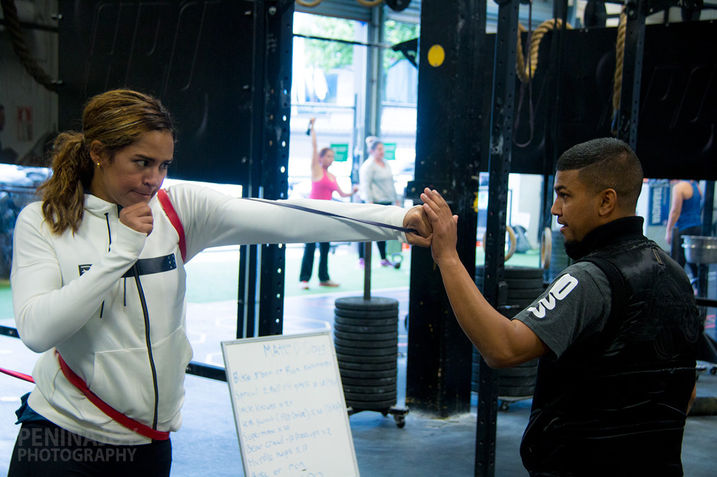 Genahs Nutrition:  The hardest part for me is the eating and the nutrition, not because I'm not disciplined but because I didn't have the education on correct nutrition and stuff like that before.  Now I do, I'm getting to know my body inside and out for my job and I have to cut weight a lot for fights and things like that, it's just a part of the sport but yeah, it was tough!  Very tough at first and you know I'm 5'11, I'm a big girl, I carry a lot of muscle as well as mass and water and I'm Samoan (laughs) and so it's definitely something that I need to keep on top of and work hard at with my nutrition.

At the moment because I'm in Fight Camp and losing weight for this fight I'm actually following a Ketogenic Diet  which is very high fat, moderate protein and little to no carbs.  It's working well and I'm getting great results from it.  It's been the easiest that I've been able to cut weight on this time round than other times thank God!  I've been through some really tough, tough weight cuts!  With Poly food - on this diet I'd be able to have Raw Fish and thats about it - my favourite is chop suey but yeah, I wouldn't be able to have that, but after the fight I will (laughs). 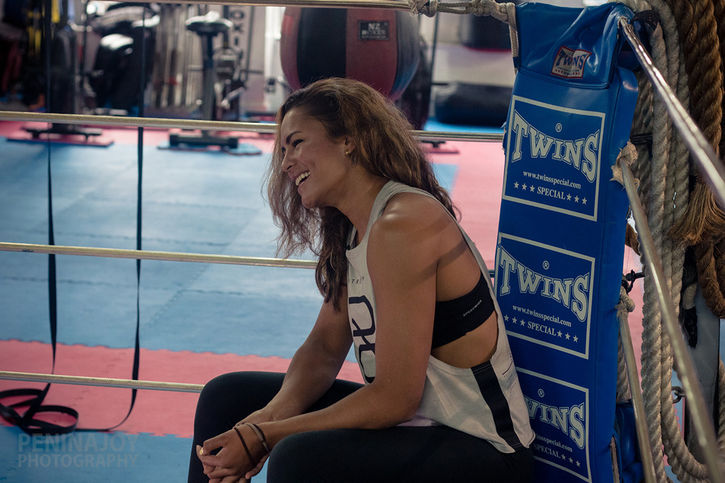 Genahs World:  With my fights and stuff I haven't really been able to explore when I go to other countries just because when I'm there I'm always usually cutting weight leading up to a fight, training and then I'll fight and I won't spend much time there after but hopefully in the future I'll be able to chill out after my fights and have some fun but so far I just go to fight and come back.

I have a lot of people I admire for different reasons.  I love Holly Holm, I think she's got a great style, she's strong, she's technical, moves very well and she's a South Paw.  My favourite and my first female fighter that I noticed and was wowed by was Miriam Nakamoto from America, she's a Muay Thai World Champion, very decorated fighter - she was technical but brutal and she can do everthing.  When I first saw her I was like Wow!  She's amazing!

For other women getting into the fight game - be relentless, even when you do have family who love and care about you, you'll be on your own and thats OK, you'll be fine, you'll figure it out.  You'll get through it as long as you have that desire & need and want ..... desperation .... like I have (laughs)  But no really, anything you put your mind to - you can do it.  If I can do it, believe me so many people can!  I'm not special, you know?  I'm no different, I had the same upbringing as a lot of Polynesian & Maori girls here in New Zealand.  I didn't come from a rich family ....  I just always had a really relentless work ethic and belief and desire I think and it was that strong I've gotten to this point. 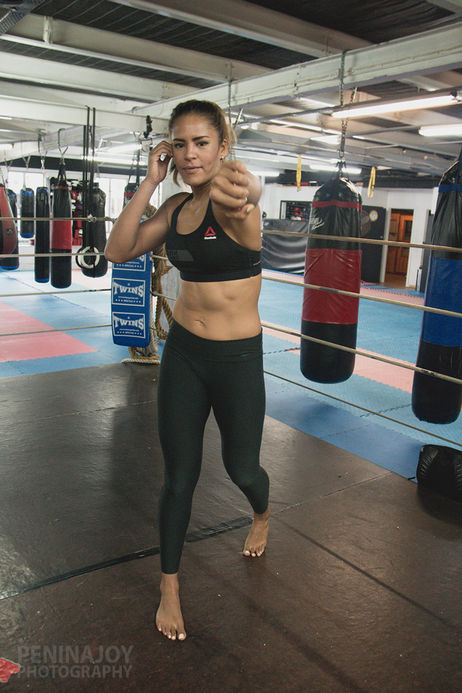 Genah Fun Facts:  One of my favourite Michael Jackson songs is Billie Jean and I have an addictive personality so I named 2 of my dogs and my car Billie Jean.  I love a lot of Polynesian and kiwi artists and I listen to them a LOT when I'm overseas because it reminds me of home but yeah, Six60, J-Boog I love, Pieter T, Deach & all of the Smashproof boys there's a lot I'm probably forgetting but I love the kiwi Poly artists.

Genahs Tattoo:  The tattoo that I have on my side is a Protection Tattoo - protection for myself, protection for my family and to support what I wish, what I think and my safety.  It's a traditional Thai Sakyan tattoo.  I got it done a few years ago and it was done the traditional bamboo way and because it was on my ribs it freakin hurt!  I didn't realise (laughs) and it took hours because it's very detailed.  It doesn't look that big but it's because it's done with the bamboo so it's kind of like the Samoan traditional way but it's their form of doing it. 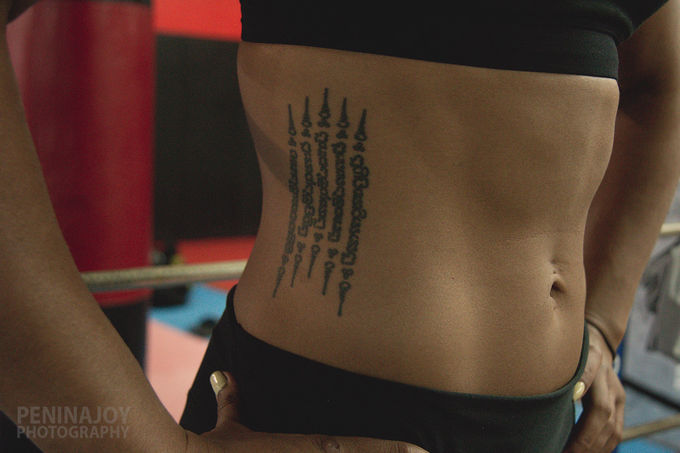 Genahs Aspirations:  I want to be the World Champion!  At the moment Bellator is one of the biggest promotions in the world so it's a huge accomplishment and opportunity to fight in Bellator so currently I want to work towards getting that belt there and stake my claim at Bellator and then see what happens in the future.  At the moment UFC don't have my weight division but they will at some point.  For now Bellator does and it's a major promotion so now I just gotta win my first fight! 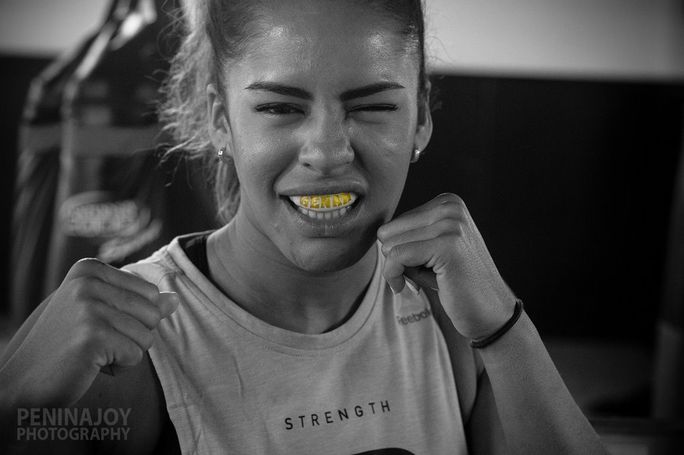 Carlos Ulberg - Fighting for his Future