“My mother, she make anything. She make ngatu (tapa cloth), she weave…"

“When I was a young girl, I grow up watching my mother and that is how I learned. Just by watching her.”

65 year old Sulieti Fiemea-Burrows tells the story of how she first began her craft in the village of Falevai. A small community in the Vava’u islands of Tonga, with a name that literally translates in English to ‘water house’ - a telling of how the seas and oceans surround its homes.

In Falevai, her curiosity and eagerness drew her hands to a craft which is now, no longer practised in the village.

“Everytime she do something - sitting over there by the tutua (wooden block) with ike (hammer-like object) and doing tapa. I sit by her and do my little stuff too.” 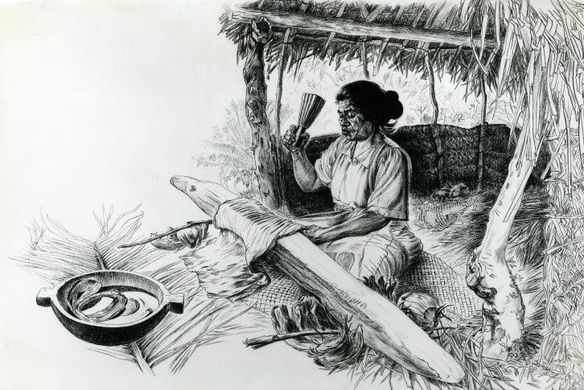 For Sulieti’s mother, her work provided an income for the family and was often exchanged for food.

“Yes, that’s strange enough that she don’t like me to use the stuff that she use!” said Sulieti laughing.

“She wants me to just go and get the off-cuts for me to use it because she told me I’ll waste it. So I get the off-cut and that’s the way I use to do the work.”

After meeting her Kiwi husband in Tonga’s capital, Nuku’alofa, in 1978 and then moving to New Zealand, Sulieti explained she often thought about ‘home’. Her husband sent $10 NZD to Tonga every week to help her mother and Sulieti wanted to help him.

“That’s where I start to try to make tapa and take to the flea market to sell.” 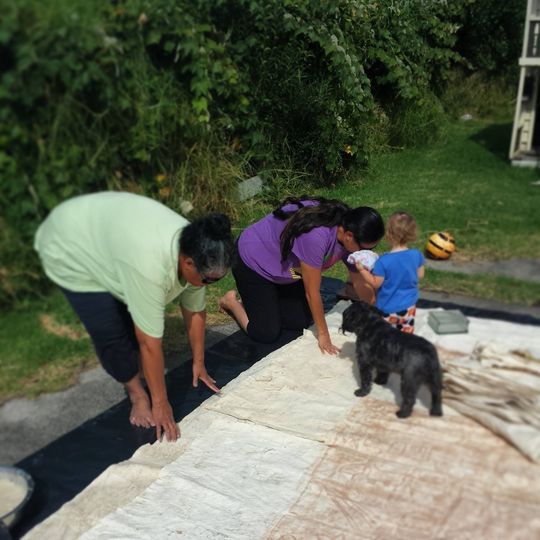 “I do some sewing and take over there. Anything I can make, I take with me to the market to sell and send up some money to my mum.”

And in the same way her mother Ema Topeni, perhaps accidentally, passed on the family craft, Sulieti did the same for her daughter Tui Ema Gillies.

“When she was two years old I can see her sitting over there, she will get a little cut piece of tapa and she play with it,” she said

“And when she’s three years old she’s coming along with me to the market. And then she grow up and she’s over there selling her stuff.” 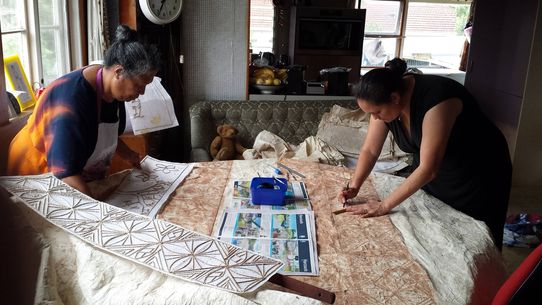 Now 36 year old Tui is a professional Tapa-cloth artist herself and is helping to revive what has become a dying art-form in Tonga.

“I’m very proud because I can see my daughter, she continue what I’m doing and what my mum was doing,” said Sulieti 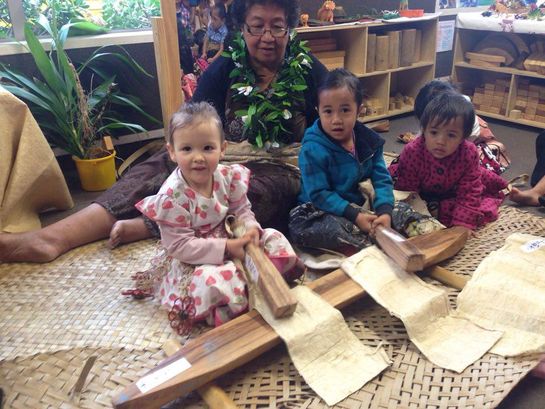 Tui explained that the art form, which is now no longer practised in her mother’s village of Falevai, is dear to her.

“I actually grew up in a bedroom where my whole room was covered in my grandmother’s tapa cloth,” she said

“She had made all this tapa - it was like a healing cloth and very warm. It was like a tapa womb.” 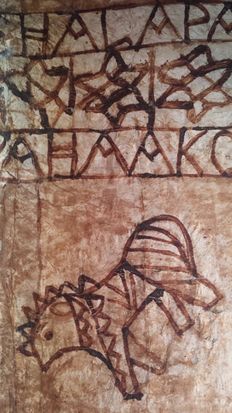 Print from Tui's bedroom wallpaper growing up, the Ngatu painted by her grandmother Ema Topeni.

The process of making tapa is long and rigorous, which adds to its value.

It is made from the bark of the mulberry tree or tutu which is soaked in water overnight, Its strips are then beaten over a tutua with a ike until they become wider and longer. Once dried, the pieces are joined using a paste made out of manioke (tapioca) flour, or potato starch. 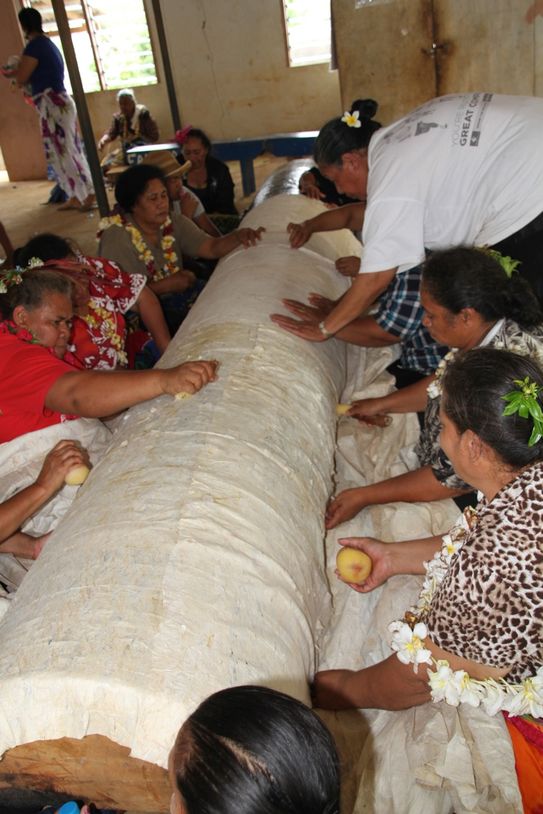 “There are no mulberry trees growing over in Falevai, so we purchased the tapa cloth at Nuku’alofa in the market and we took it over by plane and put it together with the women,” explained Tui.

The process of stitching the kupesi together involves all the women coming together in what is called a koko’anga - this is where many young girls learned the craft by watching their mothers, aunties and grandmothers.

“It was the first time they had received money for any of the work they had done,” said Tui of the women of Falevai.

“We were very lucky because we had Creative NZ - they provided to be able to pay the women as well.”

“It was quite empowering.” 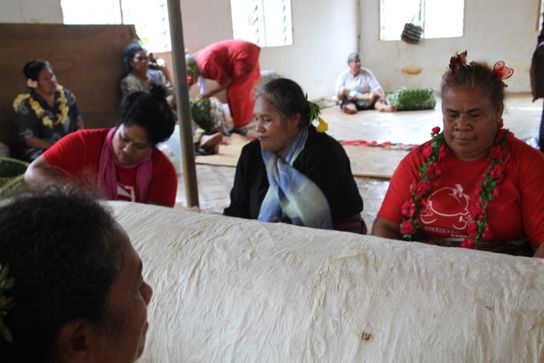 After their six-by-four meter long tapa cloth had been put together, Tui and her mother returned back to New Zealand to paint it.

Once tapa cloth is painted over and dyed, it is then called ‘ngatu’. Ngatu is one of Tonga’s most treasured possessions and each design contains cultural value and significance.

Tui's innovative designs have taken a turn from tradition and for the first time include coloured pictures of village life, never before seen on traditional Tongan tapa cloth.

“Sometimes mum would worry a little bit and say ‘oh well, you can do it because I’m doing it with you but oh you know, some of the people, they might get mad.’” 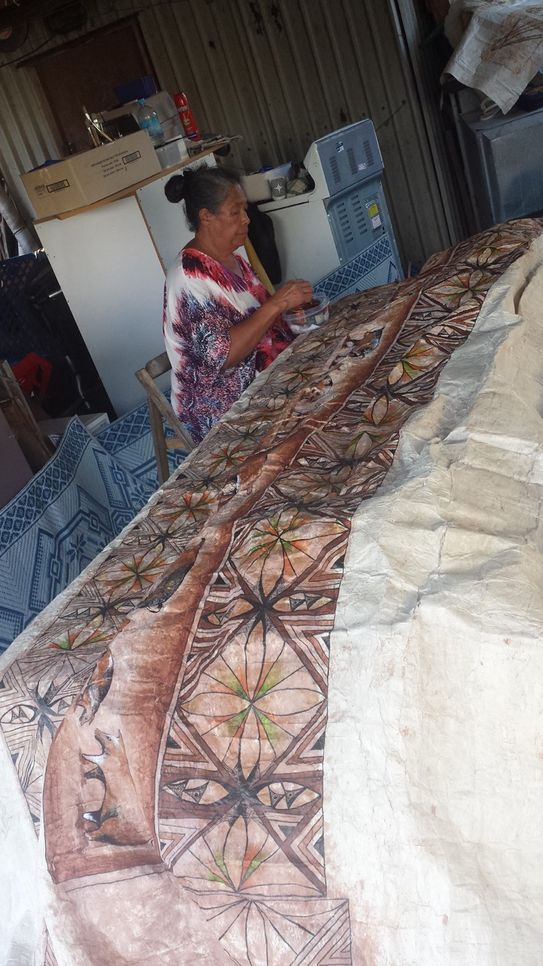 Tui's mark on the art reflects her own inspirations and where she comes from.

“Auckland is like a big melting pot of cultures,” she said

“There are so many cultures, there’s so much colour and the the polynesians - they love colour!” 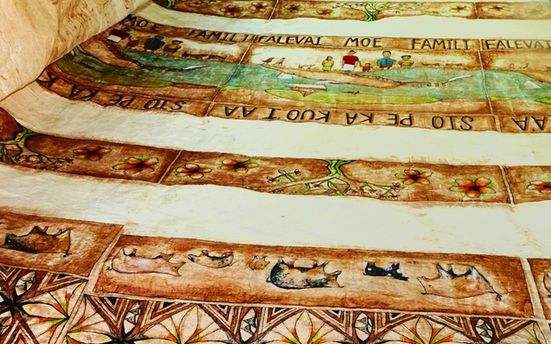 As a modern contemporary artist, Tui says tapa is an amazing art to draw from.

One of her latest pieces, titled ‘Fefine’ depicts a daring and provocative empowerment of women. 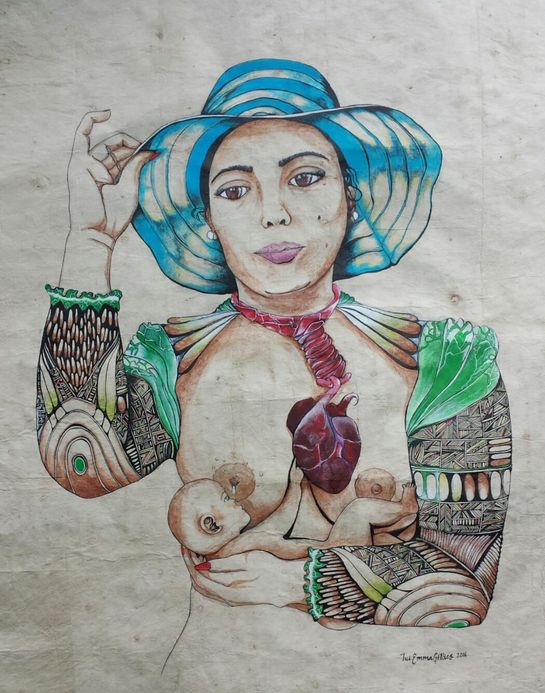 “We’re powerful. We can do so much,” she said

Now Tui and her mother Sulieti have traveled to various parts of the world, sharing the beauty of Tongan heritage through their artwork.

Tui says she loves learning from her mother and describes Sulieti as a perfectionist.

“Naturally when you’re together all the time you get frustrated at each other (laughs) but it’s awesome and it helps me stay in touch with my Tongan roots.” 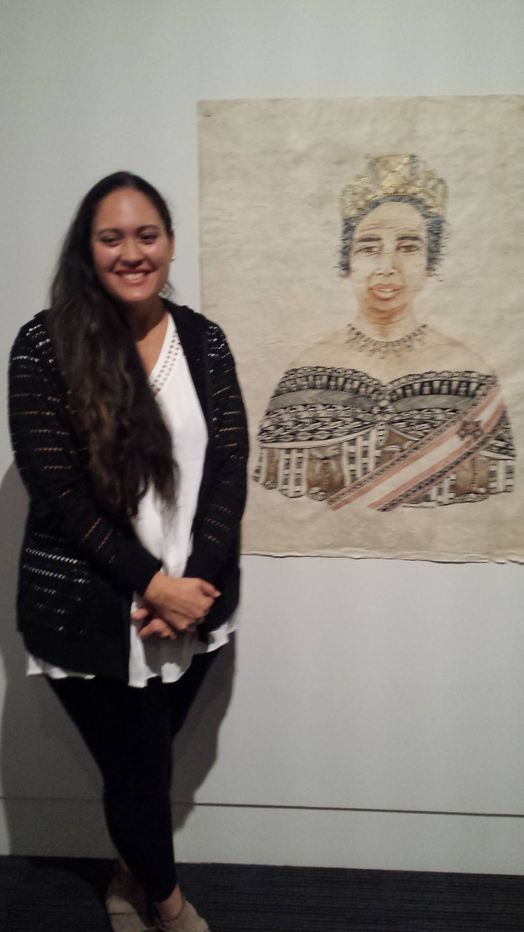 Tui describes her mother’s work as strong and long-lasting, and refers to a baby bassinet that Sulieti had made years ago in Tonga.

“Before we move to New Zealand, I carried my son and I sit every night and weave the bassinet of my baby,” explained Sulieti.

The bassinet is made out of natural Tongan plant fibres, tu’a niu and lou’akau, and is nearly 40 years old.

It has since been passed down and given new life in the bedroom of Tui’s children, as a light shade.

“Nothing’s come off. We could probably dust up the top but that’s it.” 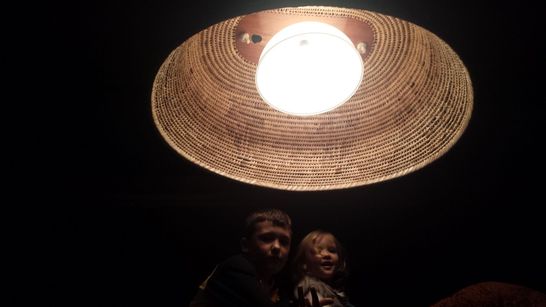 Their schedule over the past year has included a presentation at Vienna University in Austria and speaking at a conference in Madrid as well as the National Gallery of Victoria in Melbourne.

While in Madrid, Grassi Museum in Germany requested to buy a kupesi (print block) Sulieti and Tui had made to add to a collection of items they had from Vava’u.

“We were a little bit hesitant with departing with it,” said Tui

“But then we thought, yes we should do it because it would be looked after over there and it’s part of spreading our work around the world.” 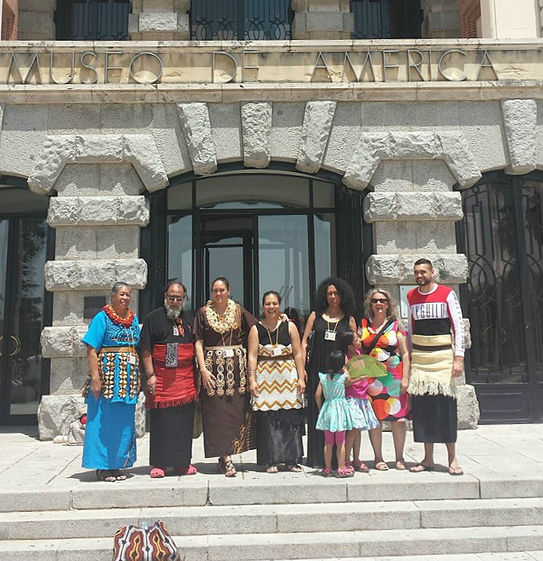 Madrid also presented a life-changing experience for both Mother and Daughter artists when they were given the chance to see the notorius Malaspina carpet - the oldest intact Ngatu from Tonga that has been kept anywhere in the world.

“Let’s just say that when we saw the ngatu there was something about it. I burst out crying.” expressed Tui

The Malaspina Ngatu Ta‘uli is around 225 years old and had been kept safe and hidden for nearly 200 years.

The majestic carpet is 30 feet long and was acquired by the noble Spanish-Italian explorer Alessandro Malaspina during a visit to Tonga.

“We can only see a part of it - because they couldn’t pull it out it’s so long,”

“There are big possibilities that it’s from Vava’u,” claimed Tui excitedly. 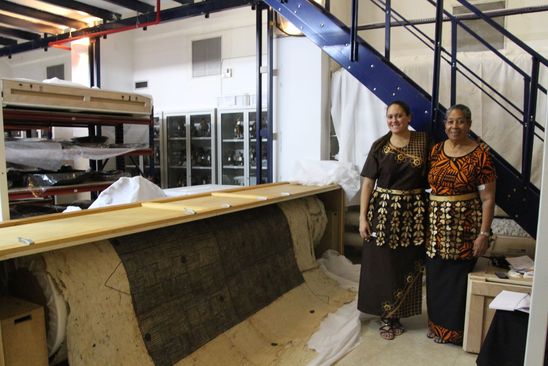 “We were told that Malaspina had come from Spain and celebrated for two weeks over in Falevai.”

The visit to Malaspina’s carpet was an emotional one for both women, having touched and experienced the oldest known example of the art form they are working hard to keep alive. 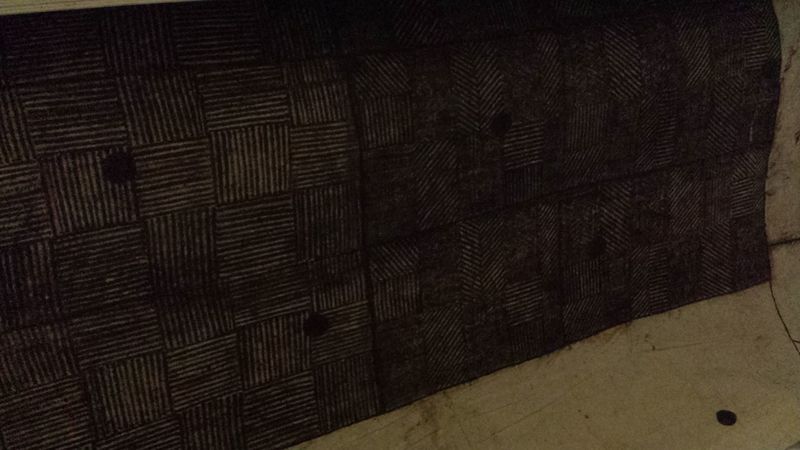 Every art piece unravels stories that are settled within the ink and woven into every fibre of fabric.

The fibres of the 'Malaspina Ngatu Ta'uli' whisper their own stories and and so too does the tapa of the ‘Falevai Flava’ piece crafted by the women of Falevai, including Sulieti and Tui.

But the most powerful thing to note about Ngatu in many parts of the pacific is that it’s not the type of art you purchase to keep on display, as is most commonly seen in other parts of the world.

In Tongan families, Ngatu is considered koloa, meaning treasure. They are treasures given to honour people during weddings and funerals and other significant events.

They celebrate the milestones of life and are in essence, the culture of Tonga pieced together.

“It’s designed to be passed over all the time,” explains Sulieti 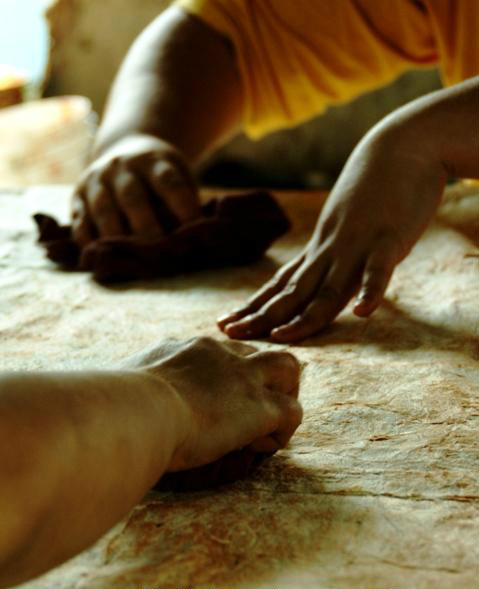